On 13 January 2021 Europatat, together with eight other European Associations, met with EU Agriculture Commissioner Janusz Wojciechowski to exchange perspectives and concerns about the new trends set for the Promotion Policy and the Annual Work Programme (AWP) 2021.

The meeting followed the request made in a co-signed letter sent to the Commissioner before the adoption of the Annual Working Programme 2021 and ahead the revision of the Promotion Policy planned for 2021. The delegation expressed again its concerns about the imbalance allocation of the 2021 promotion budget, which dedicates 30% to the promotion of organic production both for internal and international markets. The group insisted that this repartition is a total disconnection with the market reality and potential.

We believe that the EU Promotion policy should help consumers to be aware, recognize and be proud of the high standards of European food in terms, for instance, of food safety and sustainability, rather than only focusing on organic production (for which, in the case of potatoes, there is not even public aggregated data on EU production!). Also, the comparison “organic vs conventional” is too simple, some conventional crops (like some techniques used to grow potatoes) are even becoming “more sustainable” from different points of view than organic!

If the EU want to incentivize all sectors to be more sustainable following the goals of the European Green Deal, it needs to give support to all of them, with no exceptions. Potatoes are very often forgotten in the communication campaigns under the Commission own initiatives. However, potatoes not only belong to the most competitive segments of EU agriculture (both in terms of production and trade) but also remain Europe’s most popular local product (let me remind that the EU imports few potatoes from non-EU countries). Fresh potatoes are also deeply anchored in the food habits of the EU and are part of a healthy diet!

We defend an EU promotion policy that highlights the high standards and healthy benefits of every food produced in Europe without any discrimination. 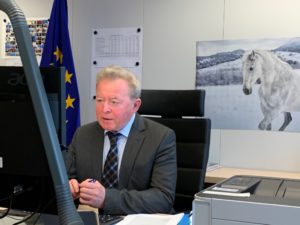