Statistics on production and trade

Eurostat data. Data extracted in May 2019 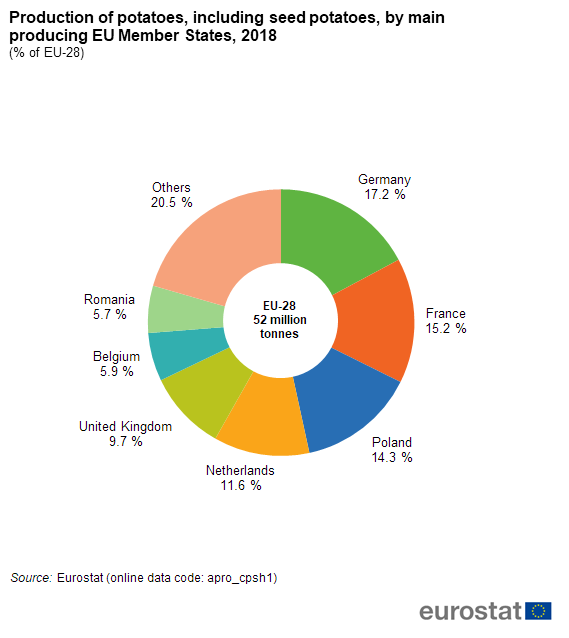 Potatoes belong to the most competitive segments of EU agriculture. However, due to the extreme drought that Europe suffered in the summer of 2018, the average potato yield slipped 14.6% in that year. Following this drop, 52 million tonnes of potatoes were harvested in the EU-28 in 2018, 16.3% less than in 2017 (according to official Eurostat data). Potato production is still mainly concentrated in seven Member States; Belgium, Germany, France, the Netherlands, Poland, Romania and the United Kingdom accounted for about three-quarters of the area planted (76.9 %) and of production (79.5 %) in 2018.

According to the North Western European Potato Growers association (NEPG), a total of 26 891 MT of potatoes were harvested in Belgium, France, Germany, the Netherlands and the United Kingdom in 2019. In that year, a record area of 613 946 hectares of consumption potatoes was planted in these five countries – 2.6% higher than 2018 and 20% more than 2012.

European raw potatoes were worth EUR 11.3 billion in 2017

Potatoes are traded mainly on the EU internal market. Member States export potatoes both outside and within the EU (to other Member States), the latter being far more significant in terms of both value and volume.

In 2018, Member States traded about 7 million tonnes of potatoes between themselves (Intra EU trade), the market value of which was EUR 1.7 billion:

tonnes of potatoes were traded between EU countries in 2018

million EUR was the value of the exported potatoes in 2018

The EU is a net exporter of potatoes: In 2018, 1.1 million tonnes of potatoes were exported with a value of EUR 495 million.