Europatat is part of an international consortium involved in the research project ADAPT (“Accelerated Development of multiple-stress tolerAnt PoTato”), which aims at developing new strategies to make potatoes fit for the challenging growth conditions of the future. The project started in July 2020 and will take place over the next three years with a total budget of 5 million Euro funded by the European Union’s Horizon 2020 research and innovation programme under grant agreement No GA 2020 862-858.

The project is progressing well following initial plans and currently two stress trials are being conducted, each consisting of 54 potato varieties which have been selected based on previous projects for differential sensitivity to heat and drought stress. ADAPT field trials are designed to resolve global molecular and physiological changes in potato plants exposed to multiple abiotic stressors and correlate them to tuber yield. The field trials are conducted by Europatat’s and ADAPT’s consortium members HZPC (heat stress-ware field, in Valencia-Spain) and Meijer Potato (drought stress-ware field in Lewedorp and seed multiplication in Nagele – the Netherlands).

Meijer Potato’s trials in the Netherlands
To continue ADAPT’s activities in 2022 and 2023 with seed potatoes all from same physiological background, Meijer Potato’s seed multiplication will be carried out in one location in Nagele. Here, 20 tubers per variety were planted. Thanks to normal circumstances and low virus-pressure not many remarks were made and shall be expected. In Lewedorp, Meijer Potato planted a drought trial field on soil that has a very low capacity to hold water, which means that in dry periods drought stress will occur relatively fast. The field is split in a drought stress block without artificial irrigation and a control block with automated drip irrigation.

Even though harvest did not take place yet, Meijer Potato’s team does not expect to see any drought stress for 2021 as there was no dry period at all. The drip-irrigation system was active for 5 minutes in total (the test period at the start of the season!). The lack of drought stress is shown in the pictures below and especially in the drone image where no visual difference of canopy between the blocks can be detected. Despite there was no drought stress in the Netherlands this year, 2021 has been a good trial year for a perfect setup for 2022 and 2023. 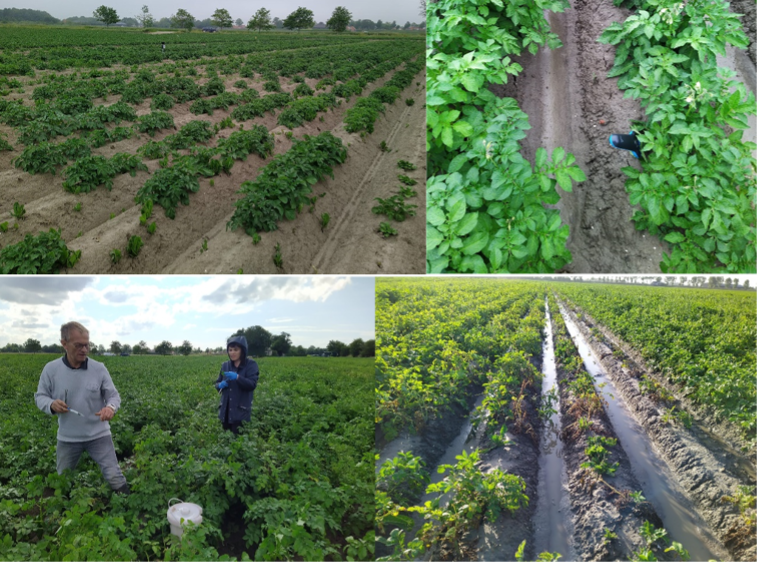 The growing season, a well-emerged field, the soil exact starter sensor placed in one oft he plots, the sampling by team Christian WUR, no water deficiency at all © Meijer Potato

HZPC’s stress trial in Spain
During the year 2021, HZPC’s field trials were conducted in Silla, near Valencia (Spain) with the objective of better understanding the effect of combined stresses on potato plants, namely heat and drought. The selected varieties were planted at two timepoints in Valencia. The first planting date was done in February, which is typical for this region. The plants grew under optimal conditions and were irrigated when needed. The harvest was successfully completed during the second week of June.

The second planting date took place in April. Such late planting ensured that varieties would face the hot temperatures during all phases of development. Of particular importance was the elevated night temperature, which has been known to have effect on tuberization of potatoes. In addition to heat, the varieties were also exposed to drought, and were watered 50% less than controls.

For each trial, six independent drone flights were conducted, and RGB, thermal and multispectral images were collected, bringing to a total of 12 flights. Additionally, leaf samples from both trials were collected at two timepoints, at the same developmental phase. Subsequent analyses will allow HZPC to take a closer look into stress genes involved in the responses to heat and drought.

A) Differences in canopy development of plants grown in optimal conditions (control plots) and under heat and drought combined (stressed plots). Stressed plants were visibly less robust and slightly chlorotic, exhibiting wilting at times. B) Differences in yield per hectare (YHA) and dry matter per hectare (DMH) between controls and stressed plots, based on the one-year data © HZPC

Even though more rain was observed during the year 2021, particularly in the early spring, the HZPC’s trial was very successful, and differences between the control and stressed plots were noticeable in all phases of plant development. After harvesting, all samples were sent to HZPC Research, where plots were graded using an optical grader and additional measurements, such as determining underwater weight, were done. The same experimental design will be used in the following project years, hoping that this data will bring ADAPT researchers a step closer to understanding responses of potato to combined stresses in field conditions.