Last week, Europatat was present at PotatoEurope 2019, one of the key dates for the European potato sector. PotatoEurope takes place in one of the four main countries for potato cultivation in a 4-year cycle. After France, the Netherlands and Germany over the past three years, Belgium has once again hosted this open-air event that has received more than 10.000 visitors in this edition in Tournai.

Europatat has used this occasion to meet with its Board and some of its members and stakeholders to discuss current and important topics on the potato sector’s agenda. Also, in order to continue its mission as the single voice for the sector in Europe, Europatat has met with potential new members. Europatat currently counts 18 national associations, 33 companies and 5 associated members, which represent 20 countries in Europe. 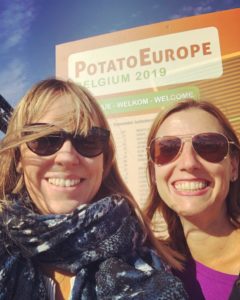 In the coming months, Europatat will also attend other events and fairs such as Fruit Attraction in (Madrid, Spain), AHDB’s Global Britain Conference in London (UK) and the Potato Variety Days in Emmeloord (the Netherlands). See you there!